Changing the Narrative: Policymaking By and For the North 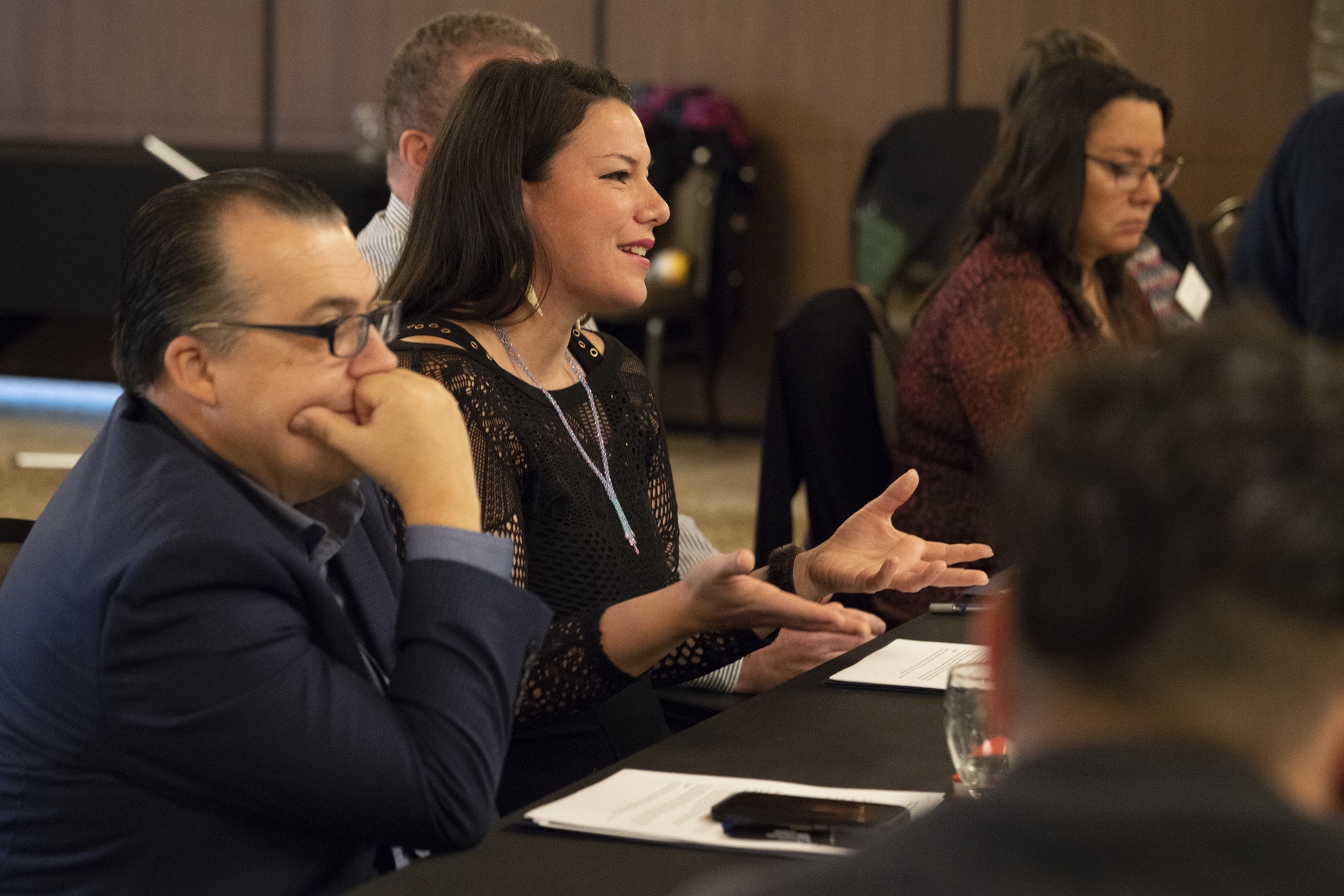 Changing the Narrative: Policymaking By and For the North

In December 2016, following the United States-Canada Joint Arctic Leaders’ meeting, the Government of Canada announced that it would replace Canada’s Northern Strategy: Our North, Our Heritage, Our Future with a new Arctic Policy Framework. In a statement, Prime Minister Justin Trudeau said: “Canada is committing to co-develop a new Arctic Policy Framework, with Northerners, Territorial and Provincial governments, and First Nations, Inuit, and Métis People.”

To ensure co-development, the government brought on Mary Simon, who has spent a career advancing the rights of Inuit, as a special representative on Arctic leadership. She developed a report for the government called A New Shared Arctic Leadership Model, which highlights that policy for, and by, northerners is integral for a successful framework and future.

“I feel it is important at this point to remind ourselves of the long history of visions, action plans, strategies and initiatives being devised ‘for the North’ and not ‘with the North,’” it noted (Simon, 2017, p. 7). Further, Simon’s report stated that “answers will be found in programs, processes, and policies that enable Arctic leaders to craft and support their own community-based and community-driven solutions” and that the next generation of young leaders is key to this (Simon, 2017, p. 23).

Next generation of northern leaders tackle the big issues

While most Canadians have never visited the North, it is a unique part of our country, and vital to our future. The North occupies two-thirds of Canada’s land mass and is home to diverse and culturally rich communities, including Inuit, Metis, First Nations and non-Indigenous peoples. It is dynamic and rapidly evolving with the highest number of settled land claims and self-government agreements, and distinctive governance structures.

With the North having the youngest demographic in Canada, northerners are taking on significant responsibilities at a much younger age. In doing so, they require access to skill- and knowledge-building opportunities related to policy and governance that are not readily available in the North.

Since 2010, The Gordon Foundation’s Jane Glassco Northern Fellowship has been recognizing leadership potential among emerging northern leaders, aged 25 to 35, eager to address policy challenges facing the North. These include climate change, transforming the criminal justice system, revitalization and protection of Indigenous languages, resource sustainability, water protection, and improvements in health and education. The two-year fellowship is built around four regional gatherings, and offers fellows skills training, mentorship, and networking opportunities.

For Melaina Sheldon, who participated in the fellowship from 2015 to 2017, it provided an opportunity to meet other next generation leaders working on innovative ideas to address pan-territorial issues. She also got to grow her network and contribute to the public policy discussion.

“The fellowship is important for the North because it falls in line with our values as northerners,” says Sheldon, who was born and raised in the Yukon. “Often in our communities, we all have a voice, something to contribute, everyone’s perspective is valid. As young northerners, we want to stay in our homes, we want to raise our families in the North, but being raised here, we also see the discrepancies between us and the South and how things need to be adapted to a northern life.”

Sheldon, who now manages the fellowship program for The Gordon Foundation, says programs like it that bring emerging leaders together are important because they recognize leadership and people’s expertise even if participants don’t have university degrees — something that is a pre-requisite in other fellowship programs. “We value that hands-on experience that you may have gained working with your First Nation or staying within communities, sitting on boards or committees, being an activist and contributing,” she says. “We’re also breaking down policy barriers. When you hear the word policy, you may think that’s for the politicians, for governments, not for the average community member.”

Through self-directed learning, group work, and the collective sharing of knowledge, fellows foster a deep understanding of contemporary northern issues, developing the skills and confidence to articulate and share their ideas and policy research. Fellows develop individual and group policy papers, which explore critical issues facing the North, and present concrete solutions.

During her fellowship, Sheldon wrote a paper on policing in the North and developed a new model to bring together the RCMP and First Nations youth. It incorporated theatre techniques into a two-day training session and was supported by the Northern Institute of Social Justice, the Yukon College First Nations Initiatives department, and the RCMP.

“The ultimate goal was to reduce the amount of youth in the justice system,” she says. “RCMP officers are usually the first point of contact and it’s usually not a positive interaction. We have young people entering the justice system stuck in a downward spiral once they’ve been tagged as a label. I was also trying to break down historical stereotypes and trauma that we hold as Indigenous people in our relations with RCMP. We come with pre-conceived notions about each other.”

This was not a regular policy recommendation, Sheldon says, but because of the connections she made as a fellow and the access she had to organizations in the North, it was possible. “That’s what the fellowship does, it kicks open those doors and says, ‘Hey, your Member of Parliament is a regular person and they’re willing to listen, they’re looking for new ideas.’”

Many policy recommendations from fellows have been, and continue to be, used across the North. Fellows also foster enduring bonds. “The pan-territorial network is so unique and invaluable and necessary,” Sheldon says.

Many of the fellowship alumni are now stepping into leadership positions or taking on important roles within territorial or Indigenous governments and continuing to work on developing innovative policies. “Together, we’re going to have a strong North but also a stronger Canada,” Sheldon says.

In May in Inuvik, N.W.T., Yellowknives Dene First Nation CEO Jason Snaggs participated in a Northern Policy Hackathon on northern housing. The hackathon incorporated issues such as financing, home ownership, building science, and improving communities. Teams of six or seven people worked together to develop policies to address these pressing issues. Snaggs had never heard of a hackathon before and says he went in with no expectations but was pleasantly surprised. “It was an excellent experience,” he says.

Since 2017, the two- to three-day event, convened by the Gordon Foundation, has brought together northerners from the three territories and Inuit Nunangat to develop made-in-the-North tangible and actionable federal policy recommendations on important issues facing their communities.

Snaggs said that too often governments make and implement policy from the top down, which is why the hackathon model is effective in bringing in new voices: it drives community solutions to issues in practical ways.

“Together as a team, with a flip chart, we started to brainstorm some background — what did we learn from own respective communities? What were the barriers to housing? What was our understanding of the current state of housing?” he says. “We then determined what the future state would look like relative to all the issues, then we started working on the how — putting recommendations together with specific details, ones that could be actionable for the federal government to consider.”

Initiatives like the hackathon help fill significant gaps in the North, where few opportunities exist for northerners with diverse knowledge to convene, exchange ideas and lessons learned, and have the space to develop solutions for the North from a pan-northern perspective. Participants usually include the territorial, regional, local, federal and Indigenous governments, community members, elders, northern institutions, businesses, and non-profit organizations. Such an interaction of a diverse group provides for rich and meaningful conversation and builds pan-northern connections for future collaboration. In addition, the hackathon provides a space for northerners to advance their skills in policy development, which in turn builds and sustains policy capacity across the North.

The hackathon recommendations are shared with federal government departments, ministries, and senate committees. While policy change is slow moving, several stakeholders have noticed recommendations from both the first and the second hackathons.  For example, Agriculture and Agri-Food Canada (AAFG) is in the process of creating the first National Food Policy for Canada. In its “What We Heard” document, it referenced the first hackathon, which focused on country/traditional food.

The Canadian Northern Economic and Development Agency is in the process of developing a pan-territorial growth strategy. Their “What We Heard” document reiterates many of the broad themes from the second hackathon, which focused on the growth of small and medium-sized enterprises.

There are also opportunities for growth in the Northern Policy Hackathon model as northern and international stakeholders, as well as academic institutions, have expressed interest in using it.

“It’s really exciting to be able to share ideas over the course of two days but also to now be connected to these different people, says Kristeen McTavish, food security coordinator from the Nunatsiavut Government. “Just to hear from people in different areas, what they’re having success with but also what the challenges are, and how we can overcome them.”

For Snaggs, the best part of the hackathon model is bringing people together. “You realize you’re not alone on an island, you’re not fighting a battle alone. It allows people to come together and work together to make great things happen,” he says. “If we were to apply this to all the issues we face within our communities, or government, I think we would be farther along in meeting the needs of citizens not just in the North but all of Canada.”

During the consultation process for the new Arctic Policy Framework, The Gordon Foundation convened emerging Indigenous leaders’ groups, called Our Voices, Dene Nahjo and Qanak, to provide input around priority areas and to ensure the framework and its policies reflect northern realities.

The resulting report, We Are One Mind (Dene Nahjo, Our Voices, and Qanak, 2018) includes 25 concrete recommendations to protect future generations and ensure healthy lands and economies. The recommendations to the government include but are not limited to:

With the upcoming release of the framework, there is an expectation that several ideas listed in the report will be used.

These are just a few examples of how northerners have been coming together to change the narrative and encourage policymaking by and for the North. As the We Are One Mind report correctly states, “there is much work to do” because building a strong North is not only the role of the federal government: “Together, we can build a new and better structure built in the North by the North” (Dene Nahjo, Our Voices, and Qanak, 2018, p.20).

This article was originally published by The Philanthropist on August 5th 2019.